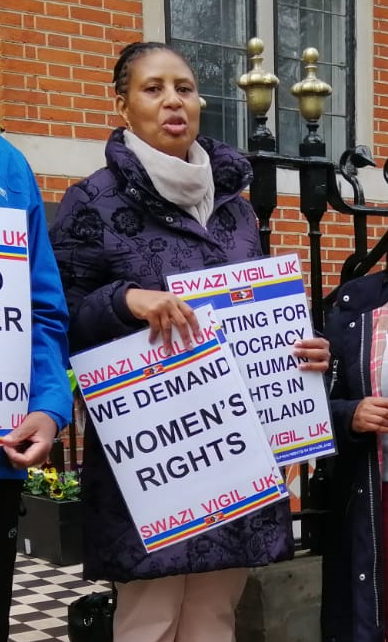 It is the BIG QUESTION the Swaziland Action Group Against Abuse SWAGAA and SWAZI VIGIL UK WOMEN are asking the High Commissioner of Police and His Majesty's government, is prince Sicelo also above the law like his father the King of Swaziland King Mswati III who is ruling the country under the 1973 decree?? That makes him above every law in the country, he is the law, all laws, all powers in the country are in his (King Mswati III) hands. All judges, government officials, public servants, members of police force, the prison service, armed forces are by definition under his direct command and therefore shall carry out orders from His Majesty the king. Traditionally, one of the king's references is: "he is always right, he never lies" (Umlomo longacalimanga). Hence, his word is final, no one can go against it. No court, no judge shall go against his word.

So the Sexual Offences and Domestic Violence Act of 2018 that was passed was meant for the ordinary man not meant for the Royals!!!!! First, prince Sicelo raped a young girl who was at the University of eSwatini, he was not arrested, now he has raped another young girl at Ezulwini but still not in custody. It is said that the the first case was sabotaged by police Senior Superintendent Clement Sihlongonyane. He must have been warned by the His Majesty's Government that if he still wanted to put food on the table for his family he should mind his own business or else he would lose his job or be demoted from his position.

The Kingdom of eSwatini is lying to the whole world that they are protecting women and young girls by enacting the Sexual Offences and Domestic Violence ACT of 2018. It is just on paper but not applied at real life. We as Swazi Vigil UK are joining the Swaziland Action Group Against Abuse to find out "UP TO HOW MANY GIRLS IS PRINCE SICELO GOING TO RAPE BEFORE HE IS ARRESTED?"

We Demand Women's Rghts in the Kingdom of eSwatini.