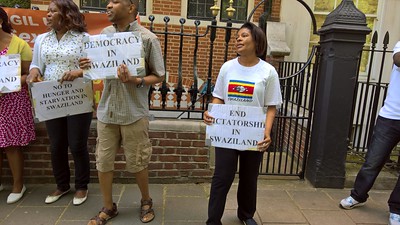 More and more Swazi people (EmaSwati) are facing forced evictions - in the midst of the COVID-19 pandemic - by the Eswatini Government. In Madonsa township - Manzini, residents have been under threat of eviction for some years now, to make a way for the  Eswatini  National Provident Fund (ENPF) (Lidlelantfongeni), a national pension fund administrator organisation.  The residents were served with a legal notice by ENPF to leave their homes by the 5th of March 2021, which meant they would be left with no alternative accommodation, no compensation and nowhere to go.  These citizens in particular were legally allocated the land they are on through the chieftain system many years ago. These residents of the township are being made homeless by the same government which is supposed to lookout for them - ironic! This is a gross violation of their human rights, to say the least, worse for them as citizens of the same country that wants them evicted. It is appalling to see how the Eswatini Government is treating its citizens and making them homeless when people are in dire need for government assistance, especially now during the Coronavirus outbreak. These evictions are carried out by the police, and the government has sanctioned the destruction of many residents' homes using bulldozers.

Most land in Eswatini belongs to the King - he owns and holds it in trust of the nation - but it has become his personal farm, so to speak.  The King has power to allocate land to individuals or families through chiefdoms - run by chiefs and their councils on behalf of the king.  The chiefs  allocate land to citizens through a traditional process called "kukhonta" (equivalent to integration / assimilation) - which could also be understood as naturalisation.  The reminder of the land is Title-Deed Land, owned (legally on a 99 year lease) by private entities or permanently owned by the government.  Recipients of Swazi Nation Land must pledge allegiance to their chiefs - thereby ultimately pledging allegiance to the king - they are also expected to render free labour to both the chiefs and king at certain seasons of the year and on events of chiefdom importance or kingdom importance. After going through the whole "kukhonta" process and redering free labour, citizens are still subjected to this horrendous treatment by the king's government - it is appalling.

Laws governing land in Eswatini and the broken system of human rights are failing the people.  There is never a year without eviction of people in Eswatini.  More citizens have been made homeless through forced evictions.  The evictions have been a never ending problem with the citizens of Eswatini.  Most people who have been evicted have been pushed to poverty, stress, anxiety and are still homeless and fighting endless battles against the government.  These evictions involve a long epensive, exhausting legal process for the helpless people who - in most cases - cannot afford. There is no one they can turn to for help if the king is the puppet master pulling strings from behind the curtain.

Recently a farm of Mandla Mkhaliphi at Sicunusa was forcefully seized by Prince Sicalo, King Mswati's son. He deployed soldiers at Mr Mkhaliphi's farm to forcefully grab the farm from its owner and a quarry mine that was discovered in the farm.  According to royalty, everything that is of value (especially natural resources) belongs to the king and his family, they do not want citizens to possess anything of great value or any mineral wealth; they forcefully take every good resource from the citizens as they (royalty) are above the law. This has to stop!  As Swazi Vigil UK, we are calling on King Mswati to stop this brutality. All Swazi citizens deserve to be treated fairly and be protected by the king and his government. As Swazis (EmaSwati) we want to be free from all oppression and  intimidation from the authorities! Enough is enough! Viva Swazi Vigil Viva!!!!!