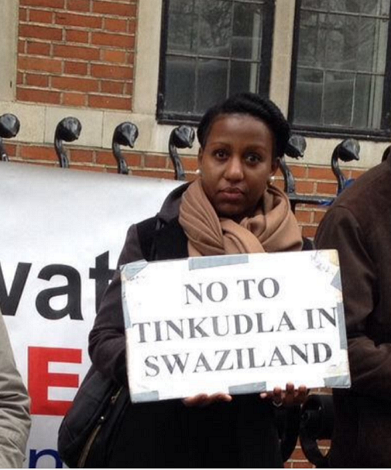 No Mother's Day celebration until the Swazi government aligns the laws of the land with the United Nations Geneva convention laws "Mothers Day"; A day where all mothers globally celebrate social, economic and political achievement and yet on the contrary in my own motherland none of this applies to Swazi women.

Women in Swaziland still face horrendous, ill-treatment and inequality due to the fact that the patriarchal culture still practiced and promoted by the King and the government has the inequalities engrained in it, society still views women as subordinates to men. As a patriotic Swazi Human rights activist and feminist, I call upon the Swazi government as well as King Mswati III to put an end to the abuse of young girls and women. The authorities cannot continue to turn a blind eye on the abuses and injustices faced by both women and young girls. According to ACTSA (ACTion for Southern for Southern Africa), gender based violence is common in Swaziland, women including young girls are raped beaten and constantly harassed on a daily basis. Even though rape is illegal and punishable, acquittal rates prove to be high and surprisingly offenders are even given lighter jail sentences. With high rates of HIV / AIDS we cannot afford to ignore such behaviour. We demand a government which is democratically elected which protects its citizens, we the Swazi people say !!!!
• DOWN with Tinkundla system that's biased which prevents women from participating in politics.
• DOWN with traditional laws that class women as minors.
• DOWN with oppressive legislations.
• DOWN with child marriages .
• DOWN with polygamy we call on King Mswati III, the legislators and the Swaziland government to change laws that discriminate against women.
According to Swaziland's constitution section 28 (2), the government shall provide facilities and opportunities necessary to enhance women's welfare and advancement; the problem with this provision is that the constitution states this is dependent on the availability of resources - of which, as every Swazi who is politically awakened knows, that this is an escape clause, because the government can claim it does not have enough resources at any time if and when it does not want to fulfil its obligations to the women of Swaziland.
We demand the government to make these facilities and opportunities readily available at all times, women's welfare and upliftment should never be compromised, neither be made optional, nor be dependent on undefined and non-precise criteria. We need laws that prohibit and protect young (under-aged) girls from getting married young, furthermore we want a Swaziland that prohibits polygamy.
We demand the people of Swaziland be given the opportunity to elect their desired government, Swaziland should be a democratic country with no one influencing or controlling the supreme executive, legislative and judiciary system. We want all political parties to participate freely without any arrests, torture, intimidation and even death.
By: Nomcebo Ngwenya

In Swaziland there has been a drastic deterioration of human rights, citizens' conditions and respect for the rule of law in recent years. King Mswati III, uses the 1973 king proclamation which banned political freedom, and at this point in time there is no freedom of expression, no freedom of assembly and no freedom of association. Since political parties were and still are banned, therefore cannot participate in any of the white-wash elections that are held to just solidify king Mswati's absolute power. I'm talking about artists in Swaziland whom the government of Swaziland is against their freedom of speech. They cannot express themselves, as artists would normally do, no freedom of speech!!! The government of Swaziland is against their vision, it wants to control what artists expose to the world about Swaziland.

Many political activists and trade unions have been killed, tortured, persecuted, had unfair trials, suffered ill treatment both outside and inside of jails.
The King rules by decrees including the king's decree of 1973, media is tightly controlled with the government controlling television and radio broadcasting stations and of course the government's own newspaper (The Swazi Observer).

The Royal Swaziland Police have killed, tortured many political activists and no one police officer has been brought to justice, and we all know no one will.

Recently university students protesting peacefully outside the University of Swaziland were dispersed by military vehicles, and in the process, a young girl called Ayanda was crushed deliberately by the police armoured vehicle (Casper). The government is using the 2008 Suppression of Terrorism Act and 1938 Seditious and Subversive Activities Act to intimidate political activists, jail activists without trial, and or hold unfair trials thereafter. There is no freedom of speech in Swaziland, and I say to the Swaziland government We will not stop expressing ourselves and demand democracy and the respect of human rights until ALL that is achieved. As citizens and political activists please respect our human rights! 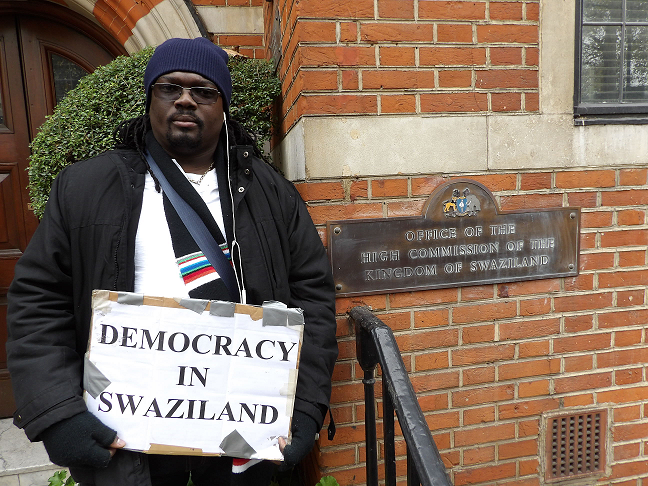 It comes as no surprise again to read in the Times Of Swaziland about Police in Swaziland beating students at the University Of Swaziland (UNISWA) for protesting on issues of concern within the University.
Every year at the University we see students protest against authorities, one asks himself "Why do we always have such boycott protests by students?" it is clear that the authorities are not doing what they were employed to do. The worse part of this I find disturbing is why is the Police force called in, as they know very well that police beat the students some get arrested for voicing their concerns .The institution has failed itself by relying on the Police force . The institution has failed itself as it no longer trusts or believes in constructive dialogue.
When I was growing up I believed that the police were there to serve and to protect the people but now they are used by the government to torture and kill people .
There is no freedom of speech in Swaziland as there is still the 1973 king's decree which banned all political parties in Swaziland, parties which stand for democracy, freedom of speech, human rights and gender equality.
Last year on the 13th of June 2015, the Times Of Swaziland published an article about a Mozambican man who used to work in a hairdressing salon in Manzini, Police came in, arrested him as they suspected him of doing wrong. The people around the salon heard the police threatening him saying they were going to kill him, later that day there was an announcement that the man police arrested earlier had passed away while being interrogated by the police. The report came out stating the man died from a headache yet he died from being tortured . The man named Luciano Zavale died in the hands of the CiD Criminal Investigation Officers in Manzini Police Station on that day.
This has changed a lot from what I believed, a man died in the hands of what we had believed is there to serve and to protect us. The Government of Swaziland uses the police force to beat and torture people who protest and voice their opinions against the state or the king or for being political activists, as they say such behaviour is action against the king.
As a member of Swazi Virgil UK, I will continue to voice out and campaign against the Government of Swaziland for freedom of speech, democracy and human rights until the whole world hears us.
VIVA SWAZI VIRGIL VIVA !!!! Amandla !!!
By: Mkhosi Shiba