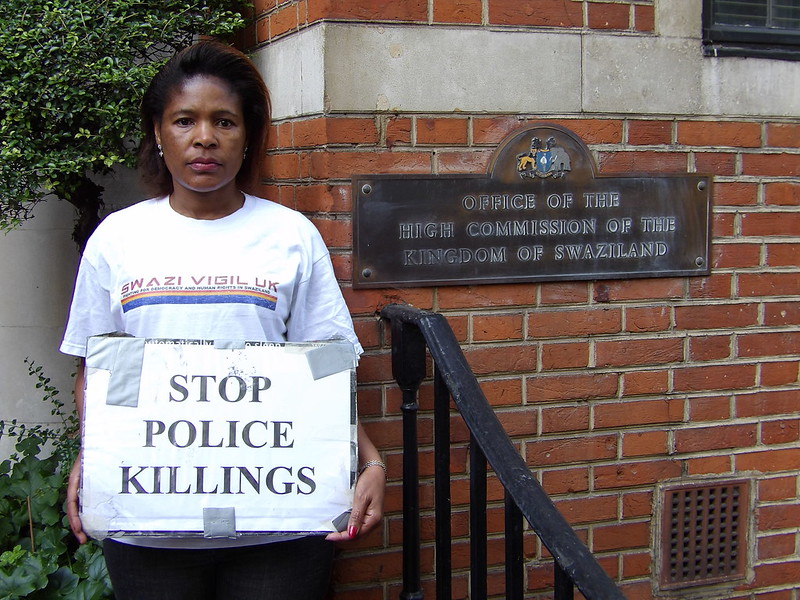 The mounting tension between the Swazi police and the citizens they are charged to protect is at its peak. Since the start of the pandemic there have been countless reports of police brutality towards those alleged to have violated Covid-19 regulations. The police are the main suspects in the death of Thabani Nkomonye.

Thabani Nkomonye was in the final year of his law degree at the University of eSwatini. He was reported by his family missing and was later found dead. His disappearance and death remained a mystery due to the alleged police cover ups.

There was a viral social media call for justice for Thabani and the end of police brutality which culminated in the organisation of a peaceful protest. The protest was peaceful however after the police dispensed protesters with teargas and water cannons. Some young people who were part of the protest were assaulted and arrested by the police.

On the 21 May a memorial service was held for Thabani, during the service police officers fired teargas and live ammunition at those in attendance. Among those that were injured and rushed to the hospital were members of Thabani’s family. Mandla Nkomonye, the late Thabani Nkomonye’s brother who informed the media that the family was still in shock over the events that transpired at his late brother’s memorial service. “This was a peaceful service, but the police, without even consulting with the family disrupted the service unprovoked. The service was well organised and the Covid-19 regulations were observed. The family are still wondering as to why the police decided to disrupt the memorial service.

This however was not the last time the public would experience police brutality during a time of mourning. Just two weeks after the disruption of Thabani Nkomonye’s funeral the police again shamelessly attacked mourners at Ancorn Hlatswako’s funeral. In the most recent incident Police fired teargas to disrupt the funeral of Ancorn Hlatswako, an Indvuna of Ebutfongweni chiefdom. According to a close family member, a battalion of armed police officers stormed the grave yard and fired teargas in order to stop the funeral. This was a result of a long standing land dispute between the Nkiliji and Ebutfongweni Chiefdoms. This incident yet again was too many, more evidence of use of over exertive force by police and total disregard for the civilians they are meant to serve and protect.

Further escalating the issue was a statement made by the King's brother while addressing parliament, Major General Prince Simelane urged the police to “fight protest action with fire”. In this statement The Minister of Housing and Urban Development, who also allegedly holds and gets paid for the position of Major General within the Umbutfo Eswatini Defence Force (the country’s military force), declared war against protesting citizens who are demanding the end of police brutality.

It is also worth noting that this statement comes after the now viral, gut wrenching video of Sanele Shiba being assaulted by few police officers after the “Justice for Thabani” protest. It is alleged that after being arrested he was further assaulted by the police at the Manzini Police station and they denied him medical treatment for the injuries he sustained.

The issue of police brutality isn’t a new problem in eSwatini. It is a norm to hear reports about the king's riot police, the OSSU (Operational Support Service Unit) using excessive force to disperse peaceful protesters. The nation is tired of this police behaviour and demand a stop. We are calling on the king of eSwatini to listen to the voice of the people.