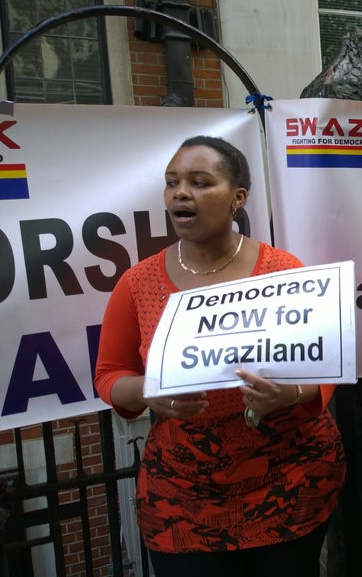 Human-rights problems in Swaziland include “extrajudicial killings by security forces; mob killings; police use of torture, beatings, and excessive force on detainees; police impunity; arbitrary arrests and lengthy pre-trial detention; arbitrary interference with privacy and home; restrictions on freedoms of speech and press and harassment of journalists; restrictions on freedoms of assembly, association, and movement; prohibitions on political activity and harassment of political activists; discrimination and violence against women; child abuse; trafficking in persons; societal discrimination against members of the lesbian, gay, bisexual, and transgender (LGBT) community; discrimination against mixed-race and white citizens; harassment of labour leaders; restrictions on worker rights; and child labour.

The Kingdom of Swaziland has the distinction of being sub-Saharan Africa's last remaining absolute monarchy. Though it is classed as a lower income country, income distribution is skewed, with nearly eighty percent of its 1.2 million people living in absolute poverty. Years of government corruption, excessive spending by the royal family and a drop in revenue from the South African Customs Union has left Swaziland in a deep economic crisis. The crisis has resulted in a forty percent unemployment rate and massive reductions in public services such as education and health care. Increased financial woes resulted in further reductions in Swaziland's flailing health care sector. The country suffers the highest HIV prevalence rate in the world at twenty-six percent but has failed to secure adequate treatment for its citizens due to shortages in antiretroviral drugs and HIV testing. According to the World Health Organization, life expectancy in Swaziland is 48 years of age.

Swaziland endures a political crisis, as well. King Mswati III retains absolute control over the executive, legislature and is immune from civil suits and criminal prosecution under Swazi law. Political parties are banned from participation in elections and many pro-democracy organizations have been deemed terrorist entities by draconian counter-terror legislation. Freedom of press is also severely restricted as many journalists practice self-censorship in fear of retribution from the government.

Amnesty International is concerned with ongoing violations of the rights to freedom of assembly, freedom of association and freedom of expression by the government of Swaziland. Pro democracy leaders and activists suffer arrest, torture, beatings, pro-longed detention and forced searches of their homes and offices. Peaceful protests and anti-government demonstrations are often met with violent dispersal by security forces. Civil society organizations, trade unions and the media undergo increased harassment and surveillance.

The credibility of Swaziland's September 2013 elections was questioned by the African Union Election Observer Mission due to the prohibition of political parties. The African Union called on the government of Swaziland to implement the African Commission on Human and People's Rights 2012 Resolution on Swaziland. Among other objectives, the resolution urges Swaziland to ensure and protect the human rights to freedom of expression, freedom of association and freedom of assembly.