CALLING FOR DEMOCRACY AND RESPECT OF HUMAN RIGHTS‏ 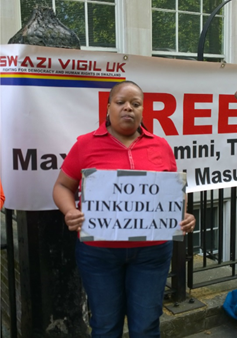 Swaziland is being ruled by King Mswati III since 1986. He has been ruling the country by the 1973 decree which was proclaimed by his father King Sobhuza II banning political parties. Political parties are not allowed to participate in elections and there is no freedom of expression, assembly and association. As political activists, we are calling on King Mswati III to allow political parties to participate in elections and have freedom of expression without being intimidated by the 1973 decree.

The is no freedom of expression in Swaziland. The media is controlled by the government, as quoted in the Amnesty International Report of 2014/15 on Swaziland. There is only one magazine - The Nation - which is privately owned. The Nation is Swaziland's last independent publication, analysing politics and social development in the country. It's editor Bheki Makhubu was arrested in 2014 and is currently serving a two year sentence for contempt of court after a grossly unfair trial.

Women in Swaziland have no rights. Women are treated as second class citizens. Violence against women and girls is a problem, putting them at risk of HIV. The Swaziland Constitution of 2005 says, women have a status of minors and are being restricted access to government and economic entitlements. Women can not get loans from the banks and land from the chief without a husband or a son who is of age.

As a political activist I am calling on the government of Swaziland to respect human rights. Political parties, human rights activists and trade unions face harassment, beatings, arrest, unfair trials on political charges, ill-treatment and torture. The responsible people are not brought to justice. The government is using the 2008 Suppression of Terrorism Act and the 1938 Sedition and Subversive Activities Act to intimidate political activities. They restrict human rights such as freedom of speech and association. The president of PUDEMO - Mario Masuku - and activist student Maxwell Dlamini were arrested at workers day rally on May 2014, charged with terrorism and sedition for chanting a slogan and singing a song. Human rights lawyer Thulani Maseko and was imprisoned for two years in July 2014 for contempt of court after a grossly unfair trial merely for exercising peacefully his right to freedom of expression.

We will not stop expressing ourselves on democracy and human rights in Swaziland. Embili Swazi Vigil viva