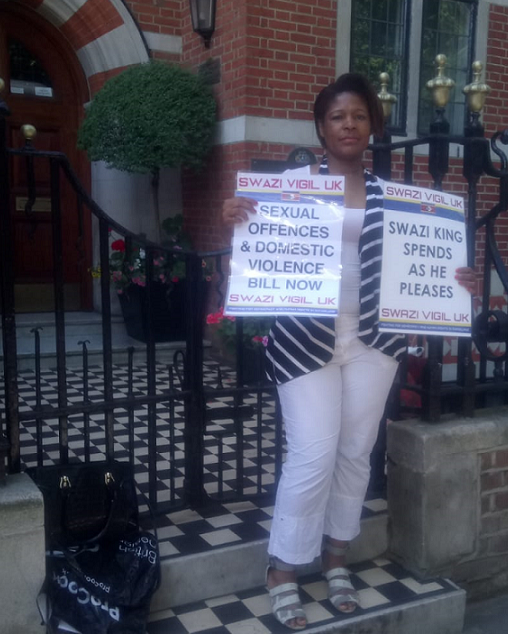 On the 14th of March 2020 Eswatini confirmed its first COVID-19 case and the country has been struggling to adequately manage the situation ever since. The pandemic has hit the Swazi nation hard putting strain on the economy as the country was put into lockdown as an attempt to curb the spread of the virus. The unprecedented lockdown saw the country coming to a standstill as all, but essential services, were closed down, this resulted in increased unemployment and poverty as businesses were forced to shut down as per the lockdown regulations. There is so much confusion and chaos about the pandemic. The vulnerable and poor are being affected the most. Many people in rural areas and in townships are facing death by hunger. They have been reduced to scavengers after losing their source of income. Many textile firms, sole traders and small local businesses have been closed leaving them with no source of income. They have been affected the most as they were unable to operate when the lockdown started and find it difficult to go back to business as usual even after the lockdown level was reduced to level 2. The ease in regulations is doing little to help these business people. As they are unable to buy new stock for their businesses as the boarders with South Africa & Mozambique are still under strict regulations. They depended on these businesses for importing goods from South Africa and Mozambique and selling them in Swaziland for survival. The boarder restrictions are just the tip of the iceberg when it comes to issues they are facing during these trying times. Their debtors are unable to pay them as most of them have lost their jobs and they can no longer sell cigarettes which have been banned”. The banning of cigarettes and alcohol has made it impossible for those who have made it their bread and butter to survive.

Hunger is widespread across the country even though the government and other private institutes have set up funds to relieve the effects of the lockdown by providing food parcels and financial assistance, these are not enough and have been received by only a fraction of those in dire need of assistance. Most were registered to receive food parcels from the government but due to supply shortages some of them did not receive the food parcels and their names were taken down with the promise that they will receive these parcels later, but still they haven't received them yet. The ESwatini government feeding scheme which is to feed the hungry during the pandemic is falling apart due to corruption. Elderly people who are left to take care of their grandchildren after the death of their parents are struggling to look after themselves and the children, since the lockdown restriction was put in place they cannot do their usual trading. It is worth noting that elderly people are the most vulnerable when it comes to the COVID-19 virus. Vulnerable children who get their meals in soup kitchens are going without food now since all the soup kitchens have been closed because of the pandemic. Children who were getting fed at schools cannot be fed since the schools have been closed ever since the pandemic started.

The country is strained on supply chain of medication, it currently owes millions to their suppliers and as a result their credit has maxed on their suppliers leaving it no other option but to buy medication on cash basis. This has a negative impact on those taking chronic medications because their medication is currently not available and most of those patients default as they aren’t able to afford buying their medication from private pharmacies. Most of COVID-19 deaths are people who suffer from chronic illnesses and on life-time treatment, and it is reported that the complications from the illnesses make their bodies weak and highly susceptible to COVID-19 which results in the high mortality rate. The shortage is further increased as all available money or donations in the country are now directed to COVID-19 funding, some health services have been put on-hold to cater for COVID-19 treatment and services leaving other services such as family planning and immunization being overlooked. As a result, health-care workers had deemed some essential services less essential than others and actively discouraged patients from coming to facilities for some of the services. As they feared that patients would contract the virus while on their visit to the hospital. This fear is further heightened by the unavailability of Personal Protective Equipment (PPE). Currently the country is experiencing a shortage of PPE, only health workers who work in the COVID-19 treatment facility receive PPE. The rest of the nurses and staff who work at hospitals and clinics are only equipped with surgical gloves and musks otherwise work in their normal working uniforms. The ministry of health had promised nurses to provide them with scrubs as extra PPE for the rest of the country's nurses and healthcare workers but still haven't been delivered.

The pandemic has opened up jobs for nurses who had completed nursing schools and were at home due to unemployment, more nurses were employed to accommodate the increase in in-patients and facilities. Even though nurses were added it is worth noting that the nurse to patient ration is still not met, more patients are to one nurse. At the Lubombo facility the nurse patient ratio is estimated to be 1:18 on day duty and 1:22 on night duty on full capacitation days. Currently, only staff in the COVID-19 treatment site is provided with meals when on duty and transport to their homes, no isolation facilities are provided for the staff even those who work in the COVID-19 treatment sites, they work and return home to their families. This is a major concern for health workers as they fear infecting their families with this deadly virus especially since they do not receive regular testing.

Regular testing for health staff has not been initiated as yet due to shortage of testing kits and/or swabs. This makes healthcare workers scared and feel their lives are being sacrificed as they are only tested after they show signs and symptoms of COVID-19 or when they were in contact with a COVID-19 positive colleague. The fear is not only for their safety but for the safety of their family members as well, if they contract the virus at work they are more likely to infect their entire family before they are even aware of the infection. Not being tested adds to that fear as the state of infection is unknown”. This is a fear sadly faced by all frontline workers in the country as even the COVID-19 task force is not regularly tested.

The task force however faces more criticism for these seizures as many nationals see this as not only an invasion of privacy as searches are conducted on all vehicles but also as them taking food away from hungry mouthed. “Since the ban of these items was announced we have had no other option but to resort to obtaining and selling them illegally as this is our bread and butter and without it our families would starve. They do not set out to break the law but they are forced to do so in order to provide for their families.

The task force faces additional denigration from the public as some feel that they are an unnecessary nuisance, since the task force cause traffic jams in roads, beating up members of the public and restricting individuals' movement to name a few. This along with rumours of police brutality and corruption has influenced the public’s perception of the task force. And due to the public’s negativity towards the task force it has become harder to maintain a civil relationship that will forster cooperation between the two parties, thus making the task forces objectives even harder to attain. Most of the time they don't practise social distancing at all, which not only puts themselves in danger but the members of the public as well. The ESwatini government has to step up and make sure that procedures are being followed by all people to be all safe during this pandemic!