FROM: SWAZILAND VIGIL UK Office
ACTSA Protest at the Commonwealth Heads of Government Meeting in London 19th April 2018
Exiled Swazis / eMaSwati participated in a political protest at the Commonwealth Secretariat where a Heads of Government for the Commonwealth countries was held from Monday the 16th April 2018. The protest was hosted by Action for Southern Africa (ACTSA).
The protest commenced at 11:30hrs on the 19th of April 2018 and was coordinated by ACTSA's Senior Campaigns Officer - Sunit Bagree. The protest started at the corner of St James' Street and Pall Mall and later moved to the near the Commonwealth House entrance, which was opposite the temporary entrance to the Commonwealth Secretariat building.
Initially ACTSA communicated that Mswati III of Swaziland would possibly attend the Commonwealth meetings, but it was later learnt that he instead sent the prime minister Sibusiso Barnabas Dlamini to represent him.
The protest was attended by various organisation notwithstanding Action for Southern Africa, Swazi Vigil UK and others. Protesters used the usual song and dance style to draw attention from members of the public, the Metropolitan Police, other protesters from other groups and the Commonwealth Meeting delegates.
Follow this link for a full display of the protest photos: https://www.flickr.com/search/?text=Swaziland%20Vigil%20UK&sort=date-posted-desc&min_upload_date=1524178800&max_upload_date=1524265199
Viva Swazi Vigil Viva!!!!
From: The Swaziland Vigil UK Office

Country Name Change - How About Democracy??? 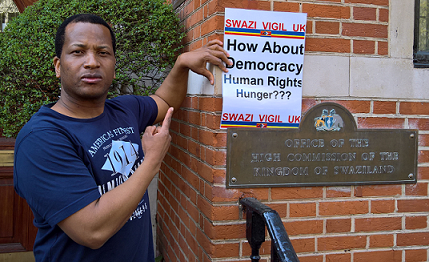 What is in a name? A name amongst eMaSwati (Swazi people) these days is no old thought, it is resounding through and through even unto the international community. King Mswati III of the former Kingdom of Swaziland has made a proclamation on his 50th birthday – the 19th April 2018 - that has just changed our country’s name to Eswatini or eSwatini, depending on which spelling you prefer. At the time of writing this article, it is unknown which spelling is to be officially used, according to the Times of Swaziland’s article by Welcome Dlamini [1] not even the Deputy Prime Minister (Paul Dlamini who is acting Prime Minister) knows which spelling is the correct one.

The dictionary defines a name as a word or a combination of words by which a person, place, or thing, a body or class, or any object of thought is designated, called, or known or a word or term by which a person or thing is commonly and distinctively known related adjective nominal or a mere outward appearance or form as opposed to fact (especially in the phrase in name) or a word, title, phrase descriptive of character, usually abusive or derogatory [2].

For many eMaSwati, the name of the country “Swaziland” did not bother them, even though in some people’s minds there was always the question as to how the country got its name. The name did not resemble the eMaSwati culture nor the SiSwati Language which is the indigenous national language. History shows the nation got its name from King Mswati II, whom the Zulus called Mswazi [3]. It transpired that the British and the Boer, who fought amongst themselves in the Anglo-Boer war also fought to control the territory occupied by Mswati II and his people who had already gotten concessions to be independent of the Transvaal state in the now South Africa [4]. The reference to call the land ruled by Mswati II Swazi land was derived from the Zulu name of King Mswati II (Mswazi). So, the Boers and the British called Mswati’s followers “Swazis or Swazi People” and that name stuck for over a century.

Changing the name to the Kingdom of Eswatini / eSwatini is somehow controversial because the claims that we are returning to a former name seems far from the truth. We were known as bakaNgwane (people of king Ngwane III) or eMaSwati (Mswati II’s people). Among eMaSwati, we refer to the country as kaNgwane or use Swaziland. It would have been easier to call it kaNgwane, but the issue is the part of Swaziland that was incorporated into South Africa in the Mpumalanga province is also called kaNgwane [5], and that would create another confusion.

I am giving a very high-level history of Swaziland to say this: Why is the king concerned about what name the country is called and going through the expense of changing the name – believe me, it is not a free rename – when there are more pressing issues at hand? Swaziland or eSwatini / Eswatini / Swatini has more emergencies to worry about than a superficial name change. I, as a member of the protest group “Swaziland Vigil UK”, I think Mswati III should have first of all changed the political climate by unbanning political parties, and set free all citizens to exercise their right of freedom of thought, freedom of association, freedom to critique and condemn the government if and when it violates citizens’ rights, women’s rights and any other injustices. What is the name change going to benefit the nation? Nothing!!!! Oh! Sorry I meant it is gaining us a lot of mockery in the international community. Mswati is busy worried about a country name instead of fixing our economy, our political system, our health system and getting rid-off the feudal Dlamini dynasty. Emaswati are hungry, most of our people are living far below the poverty line, they are sick, and they cannot get the medical help they need, WHAT GOOD IS A COUNTRY NAME CHANGE when its people are dying and suffering under the oppressive Mswati III regime?

Here is my proposed solution: first, let us cut off the head of the snake, i.e., we need to remove the mornachy and the Tinkhundla system will die a natural death, then we can build a Swaziland that is for its citizenry, which will serve the interests of its people, not the Mswati regime which serves its cohorts and the royal family. So Mswati III must go, he must be toppled off the throne and let us have a democratic Swaziland. 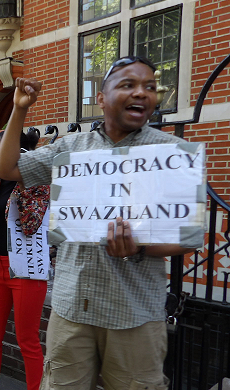