Swaziland Has No Freedom of Speech 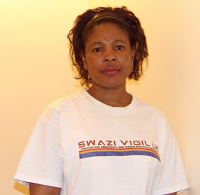 Freedom of speech in Swaziland is alluded to by the Nation’s Constitution of 2005 and the government, but it is not respected or encouraged. Most Swazis have lost confidence in our justice system. If you speak up about political affairs that oppose the government, you are seen or perceived as an enemy of the kingdom and you are treated like a criminal. Most Swazis live in fear rather than making their political views known because they are not allowed to speak up [1],[2].

As Swaziland Vigil, we will continue fighting for freedom, democracy, human rights and women’s rights until we are victorious.

Political Parties were and still are banned by the king’s decree of 1973, the king is the only person who makes political, executive and judicial decisions that pertain to the country’s governance and the monarchy. I believe that people should not fear their government, once they start fearing their government, something is not right. People should have rights to voice their concerns in everything. The government should listen to the people, because it is there because of them, without them it wouldn’t exist.

The king of Swaziland is severely opposed to any form of challenge to his rule, as a consequence, he is ready to unleash the security forces on any person(s) deemed to oppose him. Opposition is violently crushed by the forces (Royal Swaziland Police) acting under direct orders from the King.

King Mswati III also uses absolute powers granted by the Swaziland 2005 constitution to enforce a ban on dissenting political views. The constitution gives the King widespread powers: political, economic and social. The King regards his rule as God-given – an opinion shared by his family and all who support him [4][5].

The King continues to spend extravagantly on the security forces much against the advice from the IMF who warned about the ever increasing size of civil service. It is believed that this continued investment in the army and police force is his way to solidify his position. Furthermore King Mswati III also regards those who oppose him as less than citizens. i.e. unSwazi, foreign backed, enemy of the state, unpatriotic and should be eliminated.

Unless there is free flow of information, rights and constitution under freedom of expression, Swaziland is incapable of making the right decisions, innocent and vulnerable people will continue to suffer under the Swazi government.

Women Abuse and Inequality in Swaziland 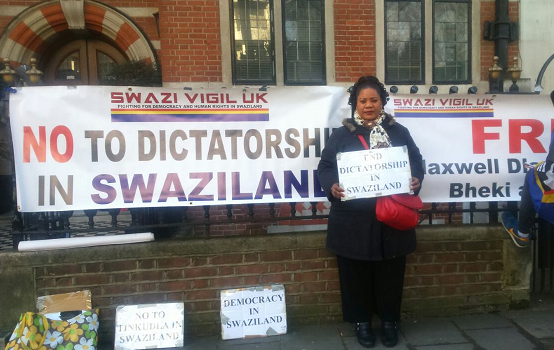 Women in Swaziland are generally heavily discriminated against in contrast to what the Swaziland Constitution Act 2005 says [1]. In Swazi customary law, women have the status of minors and as such have restricted access to certain social, government, and economic entitlements. For example a woman cannot get a bank loan without the consent of her husband, and cannot lease land without a man (husband or a son who is of age).

The Swaziland conservatives and patriarchal culture "ushito" (he/she said so) condones the widespread violation of women's rights in Swaziland, even though Swaziland has signed the convention of the elimination of all forms of discrimination against women and Swaziland's constitution of 2005 (Section 28, sub-section 1 and 2) guarantees women the right to equal treatment with men (politically, economically and socially)[1].

The Constitution of the Kingdom of Swaziland Act 2005, as quoted below, guarantees the equal treatment of women with men and yet it practice, it is completely ignored by the government and authorities:

28. (1) Women have the right to equal treatment with men and that right shall include equal opportunities in political, economic and social activities.

(2) Subject to the availability of resources, the Government shall provide facilities and opportunities necessary to enhance the welfare of women to enable them to realise their full potential and advancement.

On the 11 March 2013 Swazi women rallied against Abuse and Inequality, in addition to the inferior legal standing of women, 1 in 3 females in Swaziland have experienced some form of sexual violence as a child, and nearly two thirds of 18 - 24 years old women have experienced some form of violence in their lifetime [2] says the IRIN report 2008. More than half of the sexual violence incidents committed against girls are not reported to anyone as they are not aware that the experience they had was abuse or they fear abandonment if they told anyone, because many men regard rape as a minor offence and many including the king have multiple sexual partners[2].

Swaziland remains one of the few absolute monarchies in the world, but opposition voices are growing louder. The government and monarchy are coming under sustained pressure for democratic reform towards inclusive governance. Swaziland’s trade unions are among the most vocal actors and some have been deregistered and outlawed as a result of their protests.

Vincent Ncongwane, secretary general of the Trade Union Congress of Swaziland (TUCOSWA), will discuss the priorities and approach of the opposition movement in Swaziland, and highlight the role the Swazi Vigil UK can play in supporting democratic reform.

All Swazis please come and hear what is happening back home, so we can escalate our struggle to the next level!!!