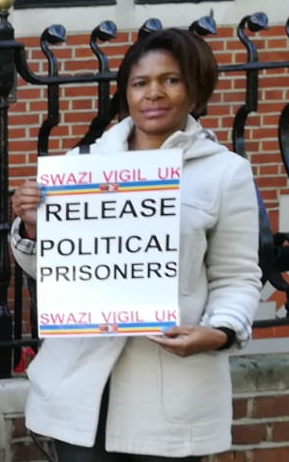 On the evening of the 25th of July 2021, MPs Mduduzi Bacede Mabuza and Mthandeni Dube were arrested and charged with terrorism under the Suppression of Terrorism Act 2008. A warrant of arrest was also issued for Mduduzi “Magawugawu” Simelane but he escaped capture. The arrest warrants for the 3 pro-democracy MPs was signed by Magistrate Msibi although they were ordered by the country’s Chief Justice His Majesty King Mswati III. The arrested MPs are just two in over 690 citizens arrested and charged in connection with the political instability the country has faced over the past months.  The “Pro-democracy” protests started in June following the mysterious death of 25 year-old student, Thabani Nkomonye.  He allegedly died at the hands of the police.  Since the protests dozens have been killed and many others tortured, detained or abducted.

The king issued the order to arrest the MP's.  On the 23rd of August 2021 the Eswatini Defence Force Army Commander, Jeffrey Shabalala resigned from his post after a viral audio recording alleged to be of him was posted on Swazi News. In a press statement released in Nokwane, Shabalala stated that after all the developments which are in the public domain, he had taken upon himself to make a plea to the king that he felt it would not be proper for him to continue as the army commander because this had a great potential to compromise his position. He then requested the king to allow him to step down from his role as the army commander. In the audio Shabalala alleges that the king had ordered the security forces to arrest the 3 pro-democracy MPs calling for political reforms.

The source of this audio and the other voice recordings in this audio scandal has been revealed to be the former Sergeant Cebile Shongwe. The senior police officer who has been making headlines after a video of her, dressed in uniform was posted on Social media. In the video the former sergeant addresses why she decided to hand in her resignation letter, lamenting that she cannot and will not in good conscience continue to work for the Eswatini government that kills its people. In the now viral video former Sergeant Cebile Shongwe cites the now infamous “order to kill” whose allegations the king denies, the death of over 70 unarmed protesters at the hands of the police and army Forces and the arrest of people including the Pro-democracy MPs on what she claims are fabricated charges. It is worth noting that Sergeant Cebile Shongwe fled the country after her resignation.

Another individual alleged to have fled the country is MP Mduduzi “Magawugawu” Simelane. In an interview with Etv News the MP revealed that he was working on engaging international bodies to intervene in Eswatini. He also refuted all the charges laid against him and claimed that he along with his fellow MPs are being persecuted for speaking for the people. His job as an MP is to be the voice of his constituents, the people who voted for him, so that he should speak for them. If he did not do that, he would not be fulfilling his duties. The people want a democratically chosen prime minister.

Since the arrests of the Pro-democracy MPs a number of schools including Elulakeni High School, Hosea High School and many others have seen their pupils engaging in protests to demand the release of the arrested MPs. Mbongwa Dlamini, The President of the Swaziland National Association of Teachers (SNAT) confirmed that that pupils were protesting in various schools due to the arrest of the Pro-democracy MPs and the lack of democracy in the country.

On the 9th of August Judge Mumcy Dlamini who is married to Judge Prince Majahenkhaba, one of King Mswati III’s cousins dismissed MP Mabuza's and MP Dube’s bail applications. A new bail application was filed by the Pro-democracy MPs was postponed to the 7th of September after the judge cited the death of a family member as the cause of the postponement. However, the bail hearing was postponed again after Judge Mumcy Dlamini failed to appear in Court. When the bail hearing was finally held on the 14th of September the judge dismissed the bail application within 30 seconds. While delivering her judgment she stated that “there was no need for that court to make a determination whether there are new grounds for the present bail application or not. I find that this court is functus officio”.  Many took this as a confession from the judge of being nothing more than a mouth-piece delivering the king’s verdict.

The MPs trial is scheduled to be held on 11th October 2021, and it has been confirmed that the same Judge Mumcy Dlamaini will preside. Many call for the judge to recuse herself as she is related to the king but many dispute if it would be of any use as King Mswati is an absolute Monarch with Executive, Judicial and Legislative powers he is the one who appoints judges. One wonders if it is possible to find an unbiased judge for the case within the kingdom.  This has caused anger to the majority of the nation, there are protests all over the country. School children are also involved, primary, high schools and universities. The country has turned into a war zone. The king is turning a deaf ear to the nation's grievances, innocent people are being harassed and shot by the security forces. The security forces have been turned to be the enemy of the people they are supposed to protect.  People now are scared to seek help from the police.

The pro-democracy MPs and all political prisoners are facing injustice inside King Mswati’s courts while murderers are granted bail, the MPs did not commit any crime, they are being persecuted for expressing their political views and wishes of their people in their constituencies they are representing.  We are calling on the international community intervene.  King Mswati has to be held responsible for all this and face charges in the international court. Enough is enough! 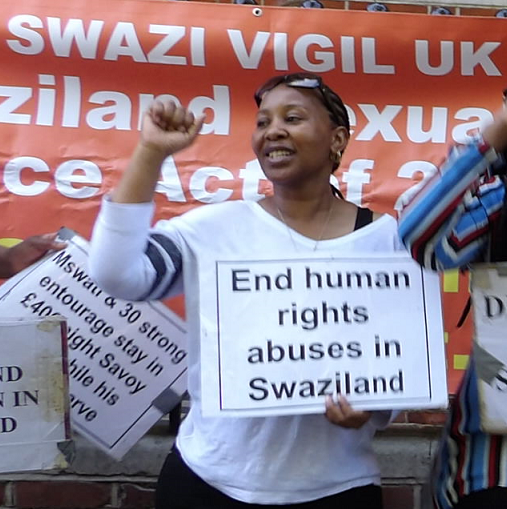 THE KILLING OF THE UNARMED CITIZENS OF ESWATINI 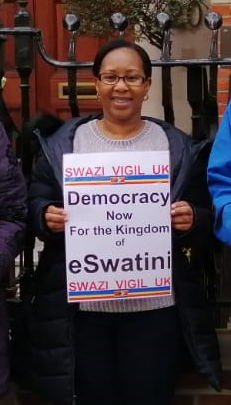 In May 2021, a law student called Thabani Nkomonye was allegedly killed by Eswatini police force members. This incident sparked country-wide youth-led protest calling for political reform, respect for human rights and a reform of the monarchy.

Practising their rights, they started submitting petitions to the parliament calling for democratic change, while they were trying to do that the government of Eswatini banned all the petitions saying people are not allowed in many because of the Covid pandemic.

The banning of the petitions resulted on people of Eswatini starting protesting. The protests have been met with increasing hostility from the Government forces.

The violence has resulted in at least 70 youth being killed and hundreds injured, some arrested by the government forces. People of Eswatini, especially the youth are calling for the democratic reforms.

In 1968, the Kingdom of Eswatini got their independence and established a political system called the Tinkhundla System of Governance. The Tinkhundla system requires regular elections to appoint representatives from traditional community and land areas, the King enjoys powers to appoint a Prime minister and a majority of the members of the House of Senate. In 1973 King Sobhuza ll banned political parties

Up to today, political parties are not allowed under the 1973decree.

On the 16 July, King Mswati lll called Sibaya, a royal gathering. The youth started a protest in Manzini, the protestors were fired on with tear gas, water cannon and bullets by the government forces. King Mswati appointed a new Prime minister to replace the late Prime minister, ignoring a key demand made by protestors.

We are calling on the International Human Rights Organisations to intervene. King Mswati lll has to face justice for human rights violations and the brutal killing of Eswatini people. ✊🏿✊🏿